Can a FROZEN song get my kid to eat veggies? 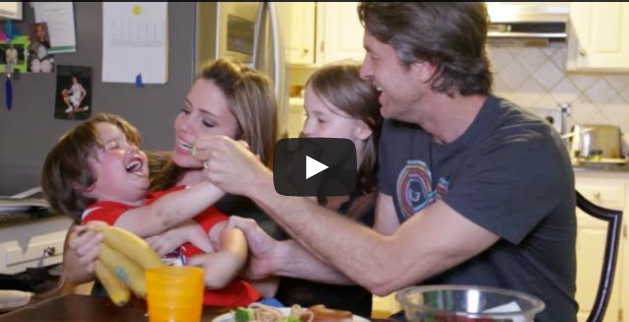 We try.  Really hard.  And we are failing. Hard.

We’ve read books, watched documentaries, asked all of our friends, even befriended someone called the Food Babe, in our quest to eat healthy.
We’ve learned we live in a world where food is rarely real food anymore.  Something as harmful as Macaroni and Cheese has PETROLEUM in it, a lot of supermarket cheese has cellulose (wood pulp), bread frequently has an additive used in yoga mats, and vanilla ice cream is often sweetened by Castoreum.
Castoreum is a Beaver’s Anal Glands.
Armed with all this information for over a year, we should be telling you a grand success story: That our family is eating nothing but real food, and that our children are super healthy.
The truth is, this is a lot harder than we thought it would be.  Why? because our 4-year old’s favorite foods are the ones we just mentioned. Mac and cheese, pizza, bread and ice cream.
If you’re scoring at home that’s petroleum, wood pulp, yoga mat and beaver anus.
Those organic apples, peas, and sprouted grain breads? We put them on his plate every night. He sniffs them out like a hound dog and turns up his nose.
Don’t get us wrong, Penn Charles is a great kid… good-natured, happy,  but maddeningly picky.  His occasional tantrums, we fear, are made worse by a diet that’s about as wholesome as Cinemax after midnight.

As a family that has watched Frozen 100 times and listened to the soundtrack another 12,596 times, we now equate our nightly plight to get him to eat to Anna, knocking on that door, ever so sweetly trying to coax her sister to break out of the rut and join her in a better, healthier life.
And that’s why we had to make this song.. Who knows? He’s such a Frozen addict, maybe this’ll get him to eat Broccoli.

DO you have any ideas to help us? Please leave them in comments.