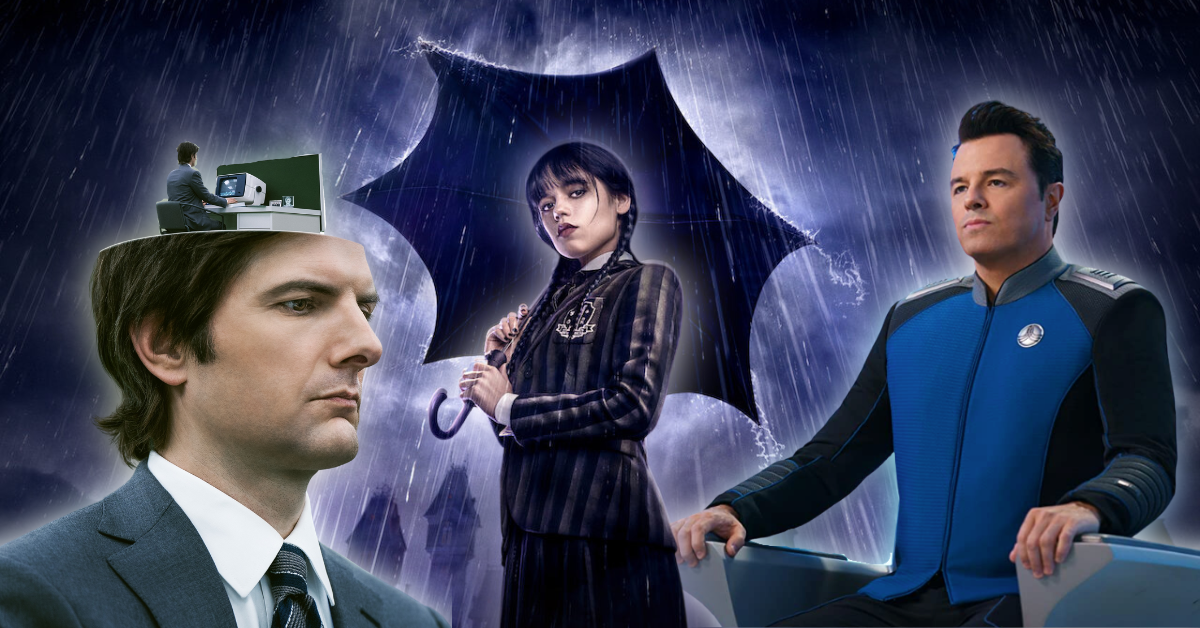 It seems 2022 was good for at least one thing…really good television. I tried my best to get my butt off the couch so this is a mix of shows I tried and ones my friends have recommended. If you have a few hours to look away from your little screen (aka TikTok) and want to stare at your bigger screen, here are 10 new TV series to check out. All of these shows are under three seasons to make them easy to get caught up.

My kids are both obsessed with this show. As a fan of the “Addams Family Values” movie of 1993, it’s cool that this creepy and kooky family is getting introduced to a whole new generation. Jenna Ortega has gotten rave reviews for her interpretation of Wednesday Addams and I’m glad Christina Ricci is guest-starring. With eight episodes all under an hour, this show is an easy weekend binge.

2. Emily In Paris on Netflix

There are some very grown-up themes but Lola and I binged the third season over Christmas break.  It follows an American, played by Lily Collins, who moves to Paris for a job opportunity at a French marketing firm. The storylines are great but the fashion in the show is really the star, if I’m honest. It’s totally reasonable for a marketing assistant to wear couture to work every day, right?

This one came as a recommendation: If you love a good murder mystery, this 8-episode series on Amazon Prime is apparently a must-see. It follows Chief Inspector Armand Gamache as he investigates multiple cases in the seemingly peaceful town of Three Pines in Quebec. Alfred Molina does an amazing job in this role as he fights his own ghosts of childhood loss and failed cases.

If you were ever a fan of Crazy Ex-Girlfriend, this new show from Rachel Bloom is an easy choice. It follows a young writer who pitches the reboot of a sitcom from the early 2000s…with the same cast. Keegan-Michael Key and Judy Greer shine as a former couple who are trying to revive their failed entertainment careers. It’s an inherently funny concept that also has some surprisingly heartfelt moments.

As I type this, my husband and son are on the couch watching this show. If you have a video game fan in your life, this is the show they are missing out on. The third season of this easily binge-able show premiered in November 2022. The show follows a fictional video game studio that produces a popular MMORPG (massively multiplayer online role-playing game). It’s led by Rob McElhenney and written by Charlie Day, whose name you might recognize from It’s Always Sunny in Philadelphia. If you’ve ever worked in an office that lists a ping pong table as an employee benefit, you’ll love the humor of this show.

This is another recommendation from friends: If you love a thriller that messes with your head, you’ll love this show led by Adam Scott who is an employee at a tech company who has agreed to a medical procedure that separates his memories from when he’s at work and when he’s not. He tries to unravel the conspiracy of the “severance” program, which is pretty difficult when your brain is split between two lives. Catch this show now because season two is on the way.

7. The Big Brunch on HBO Max

If you love The Great British Bakeoff, The Big Brunch is cannot-miss Canadian television. Hosted by Dan Levy from the beloved Schitt’s Creek, 10 chefs compete for a $300,000 grand prize. Differing from most cutthroat American competitions, this show focuses on the heart of the chefs and their unique backstories. It’s true, you might shed a tear over a perfectly baked scone.

8. The Afterparty on Apple TV+

With the popularity of “Knives Out,”  it’s no wonder murder mysteries with a twist of comedy are having their day in the sun. This 8-episode series follows a murder at a high school reunion party with each episode following a different character’s perspective. Tiffany Haddish plays the lead detective which should be enough of a name-drop to get you to watch. A second season is already in the works, presumably following a new murder.

If you haven’t heard of this show yet, you must be living under a rock. But if you haven’t started watching this show, you are definitely missing out. It follows the popular mockumentary style of shows like The Office in an underfunded elementary school in Philadelphia. Quinta Brunson writes and stars with Sheryl Lee Ralph and Lisa Ann Walter (of “Parent Trap” fame) stealing the show every episode. If you are looking for an easy watch, with a lot of heart, this is it.

Our last show is a submission from my wonderful husband: “Penn here. I really like The Orville this year. Even my wife was interested in it.  She isn’t a sci-fi space nut, but when I told her that they somehow managed to make Dolly Parton the voice of a galactic movement on female equality, she was impressed. It’s a total Star Trek clone, and thanks to Seth McFarlane it has ample toilet humor, but it somehow manages to adeptly tackle more social issues than just about any other show out there. Gender Identity, Suicide, the oversaturation of social media (there’s a whole planet they discover whose laws are entirely governed by likes and dislikes), even porn addiction (that was a really creative one). It hasn’t been re-upped yet, so it may only last three seasons, but they are three very entertaining seasons.”

What TV series did we miss? Let us know and happy watching!