How to Make A Backyard Theater 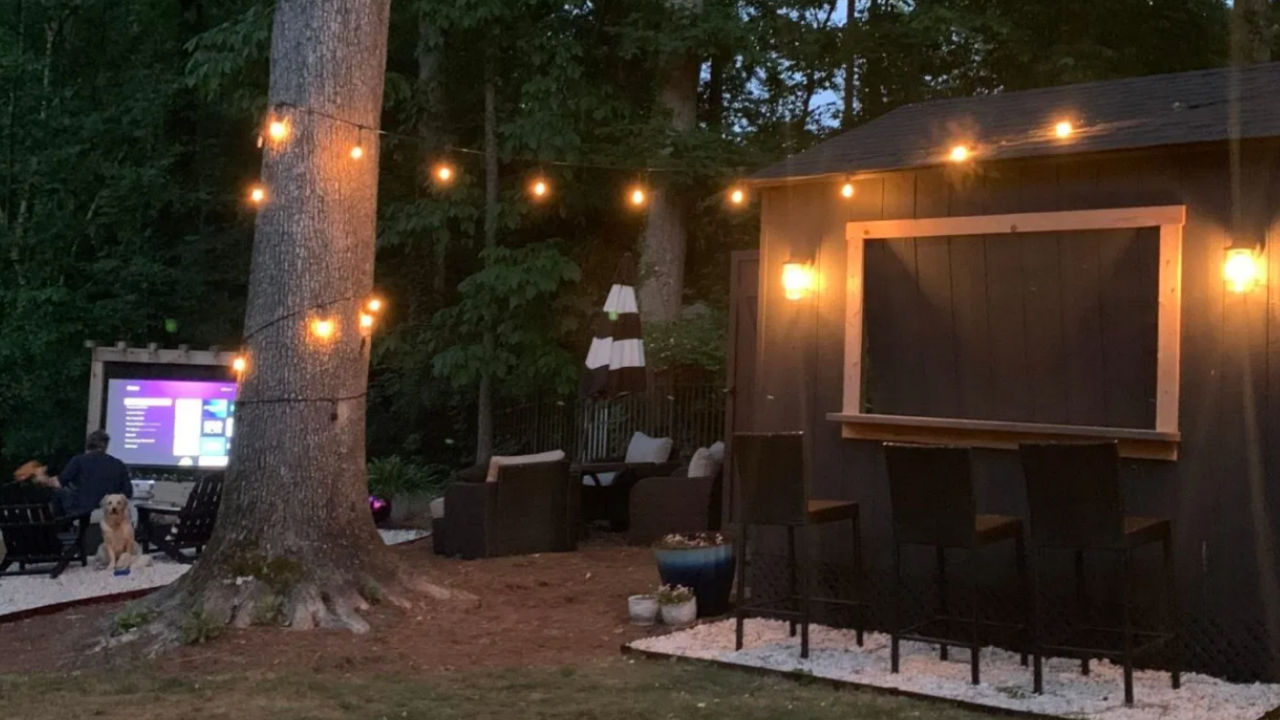 Last year, our backyard looked like a dumpster fire had a baby with a pile of rocks. It was a mass of weeds with a trampoline thrown on top. My dear friend, Monica Mangin worked with Lowe’s to give us a big ol’ backyard glow up complete with a backyard theater. We could not be more thankful.

During this lockdown, I’ve shared our almost nightly ritual of a fire and a movie in our Instagram Stories. Every time I do, we get hundreds of questions on the specifics of our backyard theater projector and sound system. So I thought I would write it down here for anyone who is curious. 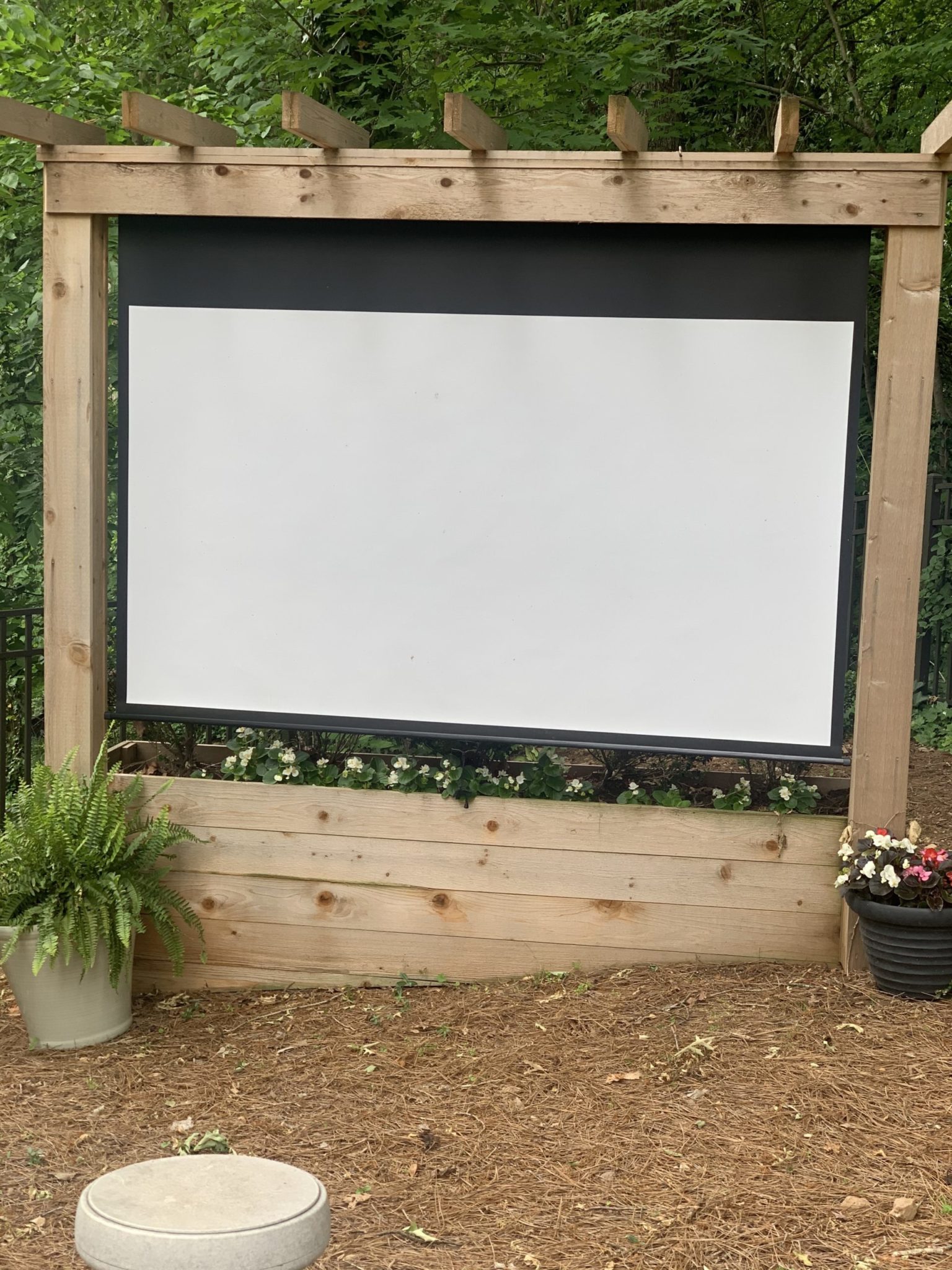 We built this frame for the pull down projector screen so it stays protected from the elements… sort of. One time, we left the screen down overnight and the next day it was soaked. So we let it air dry then rolled it back up. All good! If you don’t want to build a frame for this, there are options of portable “camping friendly” projector screens you could set up.

The projector is the most expensive part of the purchase, and you can’t really go for the bargain basement cheap ones (we tried) because you need a certain Lumen count.  Lumens measure how bright the projector is. Ours has 2500 Lumens, you can’t see it during the day, the sun is way too bright. But I’m told that projectors visible during the day are crazy expensive. Ours starts becoming visible when it’s beginning to get dark outside, like right after the sun has sunk into the trees.  Here is the one we got.

NOTE: Double check the return policy on these suckers. When I bought this at Best Buy they told me there would be a $150 “repackaging fee” if we didn’t want it. We are glad we got one that worked outside, at least at night.

The projector doesn’t have streaming apps or wifi, but we have a Roku stick plugged into the projector. It plays all the stuff we need – Netflix, Amazon Prime, Disney Plus, Vudu, ESPN, CBS and Fox. This would also work with a Fire Stick, but we already had the Roku. 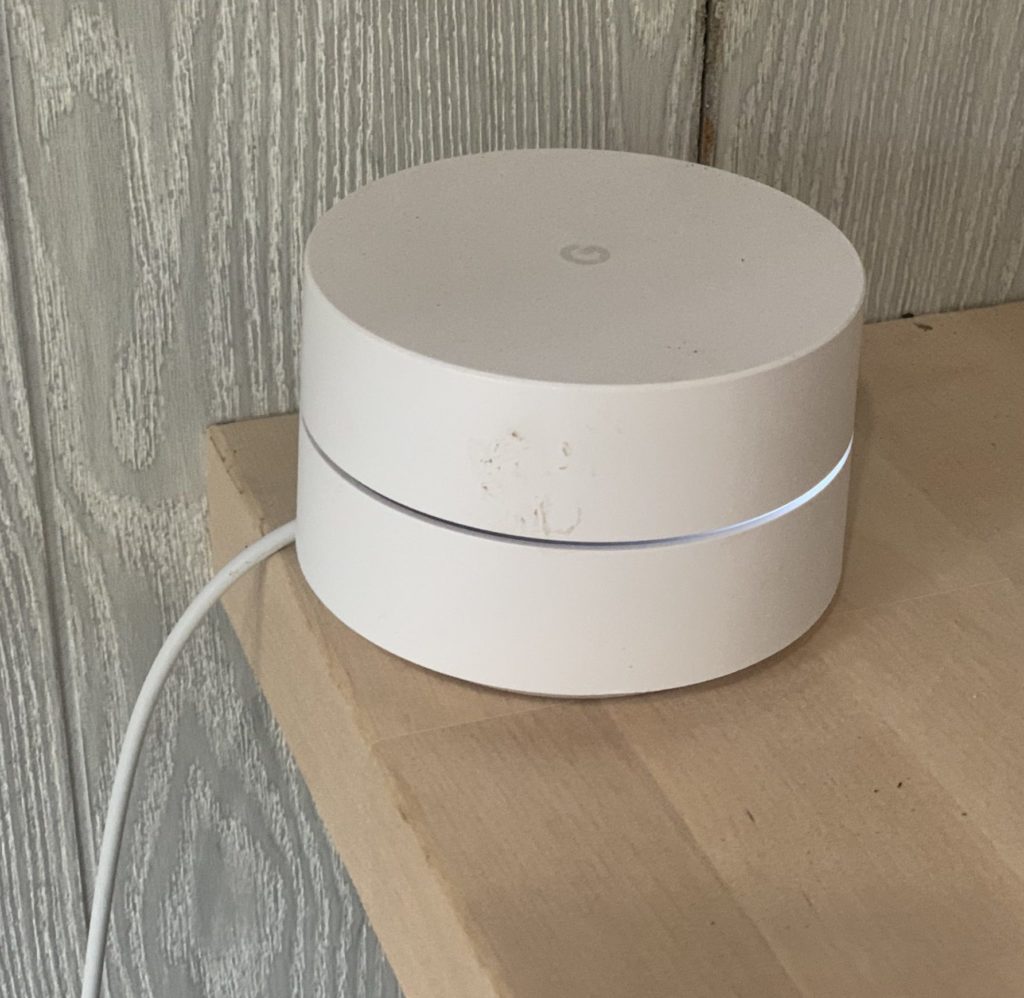 We have this Wifi booster plugged into our shed so we can get a signal to the Roku Stick. This projector has decent audio, but we have been known to plug in a speaker for a movie. We like this portable speaker because it literally lasts forever. It’s a couple years old but still available on Amazon and $50 cheaper than the newest version. Our projector doesn’t have bluetooth, so we have to connect it directly with a ⅛ to ⅛ wire.

We don’t leave the system out at night, it’s far from weatherproof.  However, we ran an extension cord underground that is moisture resistant so we don’t have to drag that in and out every night. It hasn’t crapped out on us yet, but leave it out at your own risk! We leave the projector stand outside too, so it lines up pretty close to the screen as soon as we set it down.

So basically we have the projector, the Roku stick and remote, and a mini power splitter that we pick up, walk out to the stand, and plug in. The Roku pops up automatically as the projector senses it. It takes less than a minute to set up, and we have spent countless hours using it!

Yes, that’s Gilmore Girls you see on the screen. We’re in a phase. I didn’t see it when it was on originally, so we’ve loved getting to know Stars Hollow in 2020. Do you have a backyard theater? Tell us about your set-up!

Note: Some of the items in this blog include Amazon Affiliate and other links which earn a small commission.