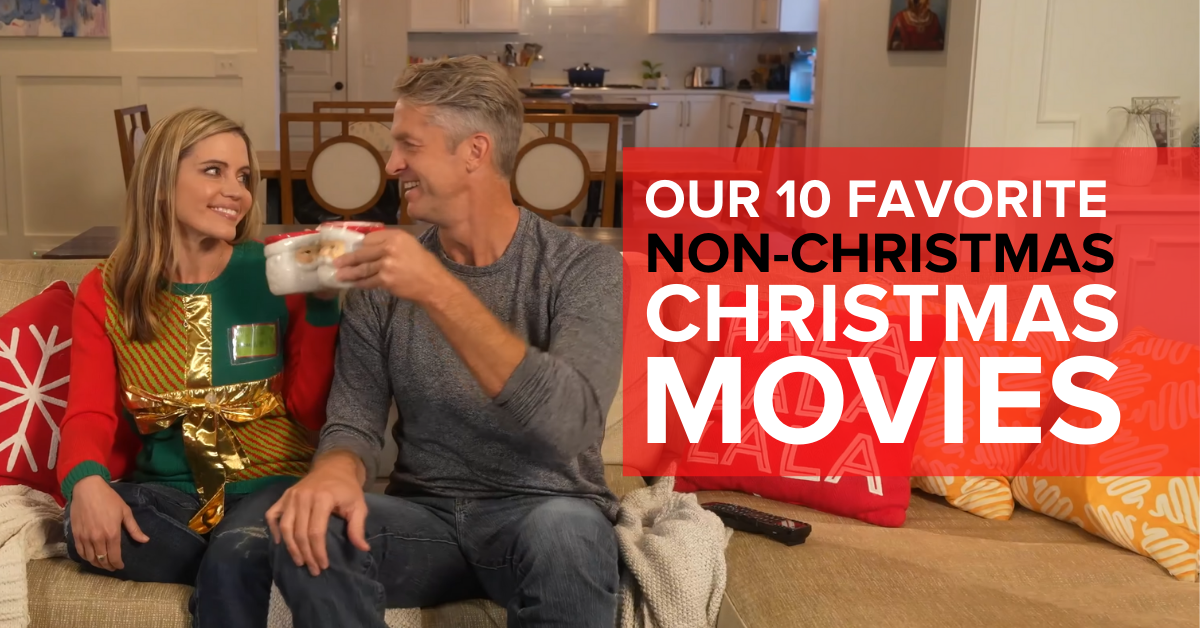 I realize this may be one of the most controversial posts we ever write. And honestly, Penn and I fight yearly about what makes a movie a “Christmas” movie.

Is it romance? A moral lesson? An appearance by Santa Claus himself? Could it also be superheroes, wizards, and demonic creatures? Meh. We all have our own holiday traditions, and for our family, a screening of one of these nontraditional Christmas movies is always on the itinerary come December.

Does the plot of this action flick have anything to do with gift-giving, carols, or Santa Claus? Not really. But with its most climactic fight sequences taking place on Christmas Eve, this ​​Bruce Willis-led film has become a holiday viewing tradition for Penn (and one I do my best to get excited for year, after year, after year).

Harry Potter and the Philosopher’s Stone (2001)

Whether you decide to binge the entire franchise or not, the decorations throughout Hogwarts, the sprawling feasts, and the fact that Dumbledore looks a bit like Santa make this a holiday movie in my book. Any excuse to visit the Wizarding World, am I right?

Sure this movie has Christmas in the title but it’s really about a sister and brother fighting over a company. For Penn and I, Fortune Feimster as the Uber driver absolutely steals the show. We actually spoke to her about it on our podcast!

What would Christmas Eve be without a horde of pint-sized, homicidal monsters that multiply when wet? In this comedy horror film, a seemingly cute little furry pet given as a gift unleashes deadly havoc on the town of Kingston Falls during the lead-up to Christmas. And it’s bloody good fun.

The ‘90s film adaptation of the Louisa May Alcott classic about the four March sisters is full of wholesome, cushy family love, with some of the film’s most memorable moments happening around Christmas (plus a slew of A-listers including Kirsten Dunst, Winona Ryder and Christian Bale). Check out the 2019 remake, too.

Johnny and Winona forever (Seriously, she ruled this decade). This offbeat romance between Edward, a humanoid with scissor blades for hands, and Kim, a human girl, isn’t your typical love or holiday story. But Edward’s snowy Christmas gift for Kim is one of the movie’s sweeter moments.

Born on Christmas Day, Penguin (played by Danny DeVito) serves as Batman’s main nemesis in this installment from Tim Burton, set during the holiday season. Michael Keaton takes on the role of Bruce Wayne alongside Michelle Pfeiffer as Catwoman.

Let’s be honest, this movie checks a lot of winter holiday boxes… Christmas, New Year’s, and Valentine’s Day. It’s a love story about hope and fate that is guaranteed to make you feel all warm and fuzzy. Plus who can resist the unbelievable chemistry from Meg Ryan (who plays Annie) and Tom Hanks (playing her ultimate love interest, Sam.)

Billy Bob Thornton probably isn’t the first person that comes to mind when thinking of someone to play Kris Kringle. And that’s exactly the point of this vulgar comedy about a thief (played by Thornton) who’s planning to rob a shopping mall until a kid foils his plan.

If you’ve been around for a while, you know that Penn and I actually appear in the movie Iron Man 3. Earlier this year our family watched the Marvel franchise in order, and the kids decided to skip it because it didn’t “advance the story.” (Thanks guys.) Regardless, this film is set at Christmas is essentially Marvel’s version of A Christmas Carol. Tony Stark (played by Robert Downey Jr.) sees the error of his ways and makes a change for the better.

What is your favorite non-Christmas Christmas movie? Share your oddball picks with us in the comments.

She’s still waiting for that herd of goats to cr

#TrapperKeeperAd The 90s are back and we’re here