PENNvestigates: Why do road trips make me mean? 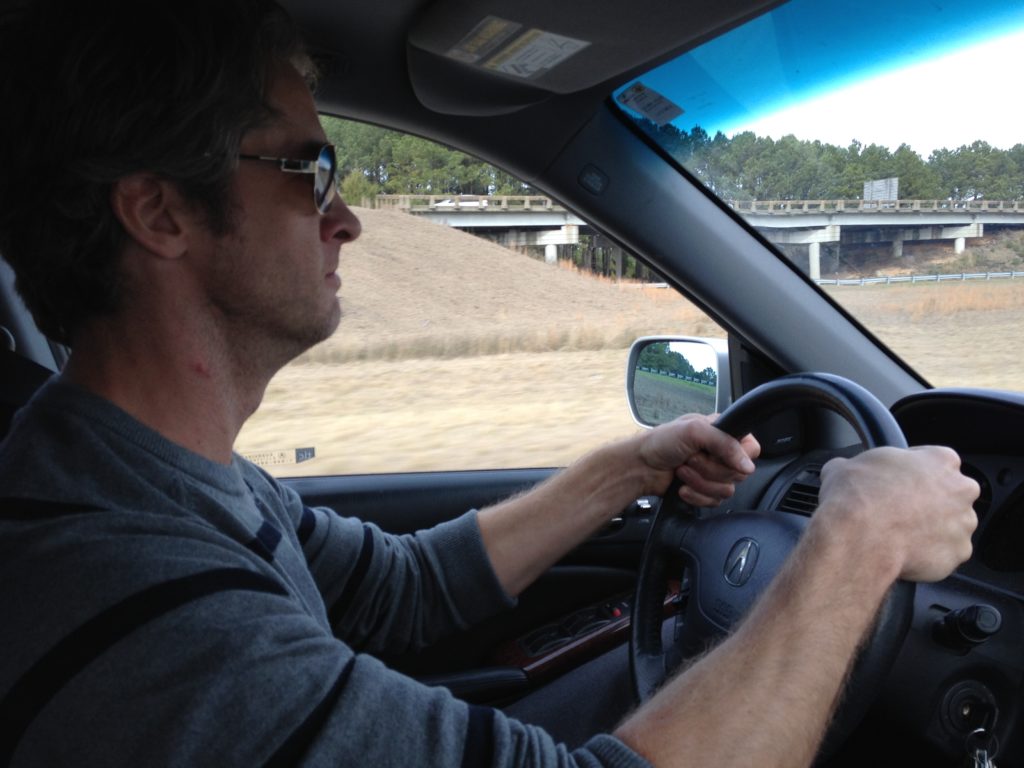 Lets start with the visual evidence…

Exhibit A – a picture my wife took during our recent 11 day road trip around Florida.  Note the posture, the extra vein sticking out of my forehead (not normal), and the Ivory White Knuckles. 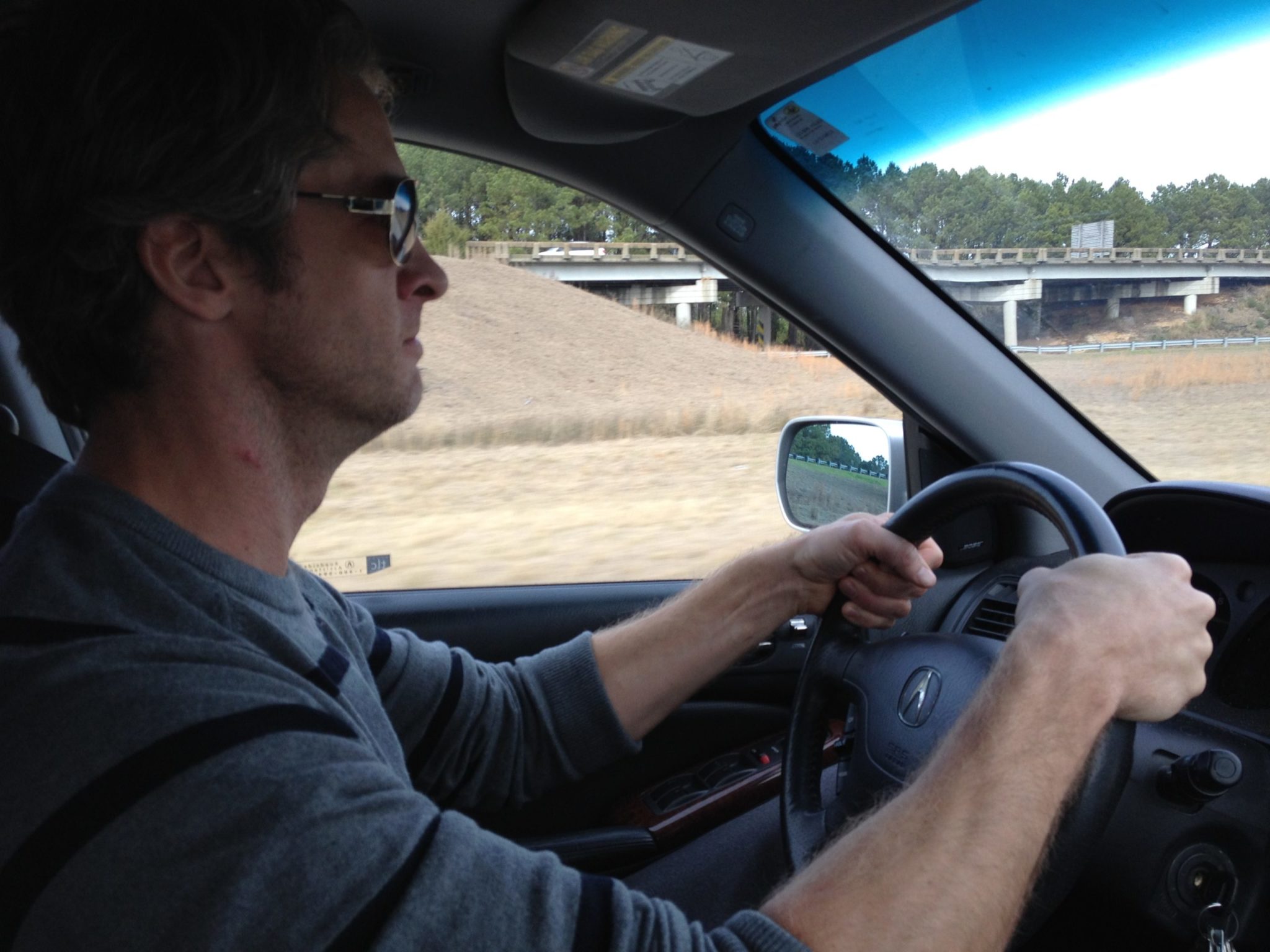 Exhibit B – when I asked my wife to do an impression of me on a road trip, she did this (and my 6 year old even joined in).

This behavior is particularly shocking to my wife, who has labeled me “The Human Golden Retriever.” I am generally very cheery, laid back and happy in nearly every situation. But this situation turns me into a (insert mean dog breed here that doesn’t get me in trouble with dog lovers).

And I  am not the only one.  There are millions of us, mostly dads.  We are, well, we’re A-Holes.  We don’t really speed, but we find the absolute maximum pace where we won’t get arrested (for me it’s 9 MPH) We turn on the GPS, and treat the Estimated Time of Arrival like it’s Moby Dick.  If it starts to get away from us, we become surly.  In the car with three other rational people, we irrationally treat potty breaks like a NASCAR pit stop, whisking the kids in and out, hopefully in a place where we can also get gas and cram food down their throats.  If our kids say “I have to pee”, we find out how long they can sit there uncomfortably without killing them.  If we are on a one lane road and the guy in front of is is going under the speed limit, we GO BLIND WITH RAGE. We are completely fixated on getting to our destination more quickly than expected… When, in the end, all this behavior probably saves us about 5 minutes.

I asked two people – one of them a personal coach, another a licensed family therapist (who happens to be my cousin, thus having some advanced personal insight).

Beth Livingstone gave me a really simple answer, and then a more elaborate one.

The simple answer : “I think you may just be bored to death, Penn.”

The more elaborate one : Beth works with a “type indicator” called Myers Briggs – that groups mental processing into one of 16 types.  In the end your personality is simplified in a four letter code – if you don’t want to bother with the full test check this out – scroll over the codes and find the one that fits you.   If your first letter is an “E”, that means you’re an extravert.  You get your energy from people around you, not so much from within.  You’d rather go to a big party than a quiet walk.  And Beth tells me extraverts struggle when they get into a car and have to stare at a road for 8 hours.

If you are an ENFP, like me, you are really in trouble.

“An ENFP is bad with routines”, says Beth.  “And if you are stuck in a routine, you start coping by turning mundane tasks into games.”

At this point I realized that she couldn’t be more right.  I was trying to beat the GPS, that was the big game.  I was also trying to find every license plate in America, and (this is really neurotic), see how few times I could breathe over a 5 mile stretch according to my odometer.

I try to get my wife and kids to join in but here’s the problem : they all have SCREENS.  My wife is on the iPhone and my kids are in the back with a Nabi or a DVD Video.  I can’t even listen to the radio because it clashes with Arthur Christmas blaring in my ears from the back seat. So I’m on my own.

So how to fix it? Beth says the mean road tripper should simply confess his/her shortcoming to the fam, and ask them to make an effort to interact a little more.  Turn off the screens.  Bring a trivia game that everyone can play, or find another game to try and break the routine.

Opinion #2, from my cousin Lorinda : her words in normal type, mine in Italics:

“My initial thought is that it has to do with control. When you have children, everything is suddenly unpredictable and chaotic. Parents often feel “out of control.” (YEP! breakfast is like Bastille Day)  Transitions in the life cycle can also contribute to feeling out of control – job changes,illness, taking care of aging parents, etc. (yes, yes and yes.  Are you spying on me Lorinda?) So, when you strap the kids in the car and hit the road, you are in control and no one, not even the GPS lady, Ethel (or whatever name you give her), (mine is Maxine and she is super hot)  is going to dictate that trip or tell you how long it’s going to take to get there. You’re in the driver’s seat now.  I think this tends to be more of an issue for dads, as it is typically the moms who become the managers of the household. They usually have the most control. They often are the ones who determine the schedules of the family and the rules of the house, for example. Therefore, when dad gets behind the wheel, he’s in charge. And it feels good. Evolutionary psychology might say that it’s the innately competitive nature of men. (I think I once put Lorinda under a rim so I could dunk on her. She is a foot shorter than me.  I have a problem and she knows it). Historically, men have had to compete with other men to find a mate and subsequently pass on his genes. Also, testosterone levels increase when competing. They rise even more when you win. Dopamine levels increase as well, so like I said, it feels good.”

Thanks, Lorinda and Beth, for the great insight.  Together we can build a better world where we aren’t putting the “Dope” in “Dopamine.

OK, now your turn – does this sound familiar? Or do you have any other theories? Comment below.

Summer in the South ☀️. Watch out for copperhe

Quick question: Do they install a fast forward but