Working from Home with Your Spouse 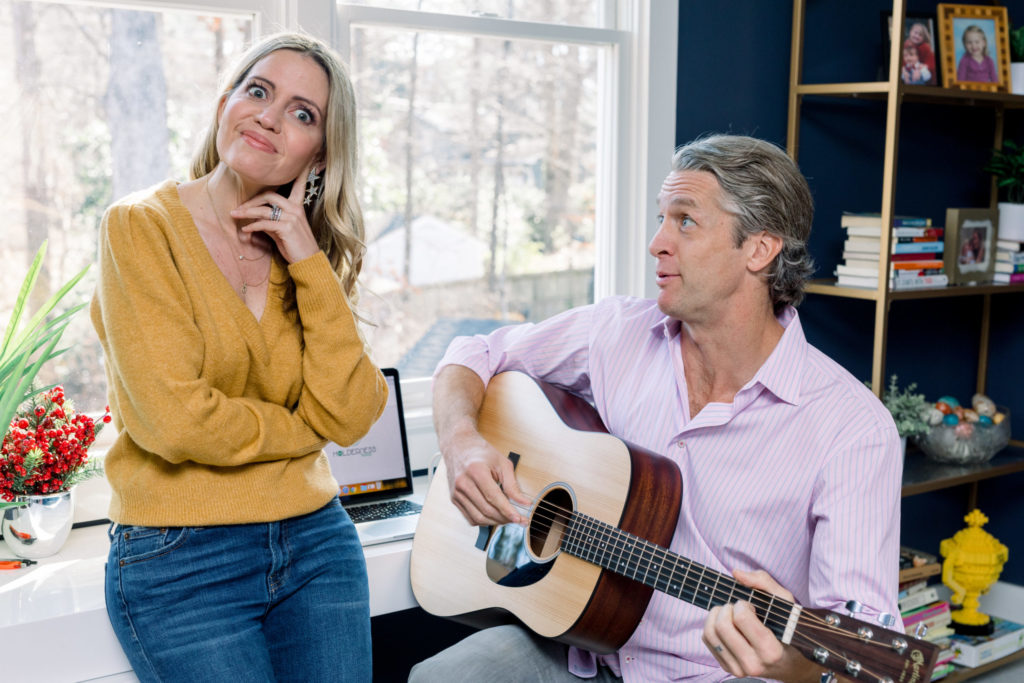 The number one question we get after, “aren’t you afraid you’re screwing up your kids” (the answer is yes, aren’t we all?) is: “How do you work from home all day with your husband?”

Working from home presents its own set of challenges. Add in a spouse and it’s bound to cause some stress eating while locked in the pantry. We joke that in dog years we’ve been married for 207 years because we live together, work together, and raise kids together.

If this social distancing has you working from home alongside your partner for the first time, buckle up because I have some tips that will help you navigate this weird new world.

Initially, we both worked in the finished attic space at separate desks. Though we create content together we have very different jobs. We would find ourselves interrupting each other to ask for feedback or to share a meme of puppies hugging. Our productivity tanked so I moved out! Penn needed more space for the editing and recording equipment so I moved my desk to the kids play area. They know mom’s work takes priority so even now that they are home because of school closures they must respect the room as my office. Even if you’re in a tiny space, do your best to separate.

We talk every morning about our to-do list for the day. It’s usually mumbled over coffee, nothing formal. He knows that if I have blocked off two hours to knock out some scripts, he won’t disturb me unless the house is on fire. This protects your time and helps your productivity. He has the same boundaries around his time. When I get stuck (or bored) I used to wander up to the attic to distract him. Now we think of this schedule like our official office hours.

3. Take your conference calls outside.

Though we work in the same business, typically, we aren’t on the same conference calls. I handle the front end of any brand engagement or new project and he handles the execution and specifics of the content with companies. Though we have separate work spaces, it was impossible NOT to hear the one-sided, hour long calls. It was annoying and disruptive to the other person. Now, as weather permits, we walk around the block while on calls. I bring a small notebook to take notes. I used to take calls in front of my computer and I would find myself distracted and end up on Facebook scrolling instead of focusing on what was happening. Walking helps me stay connected. If weather isn’t ideal, I’ve been known to take calls from inside my parked car.

4. Don’t judge how the other gets the job done.

A gift of Penn’s ADHD is his ability to hyperfocus on a project. He can sit and edit a video for 3 hours and not look up from the computer. He gets panicked if his to-do list gets too long. I, on the other hand, must take breaks to clear my head and get refocused on the work. I set my timer for 50 minutes, when it rings I walk around, drink some water, and stretch for 10 minutes. If I need to take a walk around the block to get fresh air, I do. Penn used to say things like, “I thought you were trying to knock out those scripts?” It didn’t end well.  Penn still doesn’t understand my process, I don’t understand his but the work gets done.

5. Do your lunch dishes.

This is just me. I’m a bit of a neatfreak and if there’s a mess around me, it cramps my productivity. With more people at home, you have more mess. Penn used to “save his dishes”  so, in theory, he would just do all the kitchen cleaning at one time in the evening. It drove me bonkers to have dirty dishes lurking on the counter so he’s making a bigger effort to clean up after himself. It’s a work in progress.

HEY THERE! IT’S PENN! HERE’S A BONUS ONE!

6. When you have to poop, go as far away as possible

When Kim and I first started working from home together, she had no idea about my “morning meetings.” They are at 9:15 AM and that is a hard non-negotiable time for me.  So now I find the bathroom that is the farthest away from her. In our case it is on the third floor, where she rarely goes. You’re welcome honey!

Here’s one we are starting to incorporate. We found this inspiration on Twitter.

We are naming our imaginary co-worker “Karen.” So far this week, Karen has stolen my computer charger TWICE!

Hang in there, guys. I have faith, at the end of this, our relationships will be stronger. Until then, go easy on yourself (and the partner stealing your computer charger).