80s and 90s Movies to Watch With Your Kids 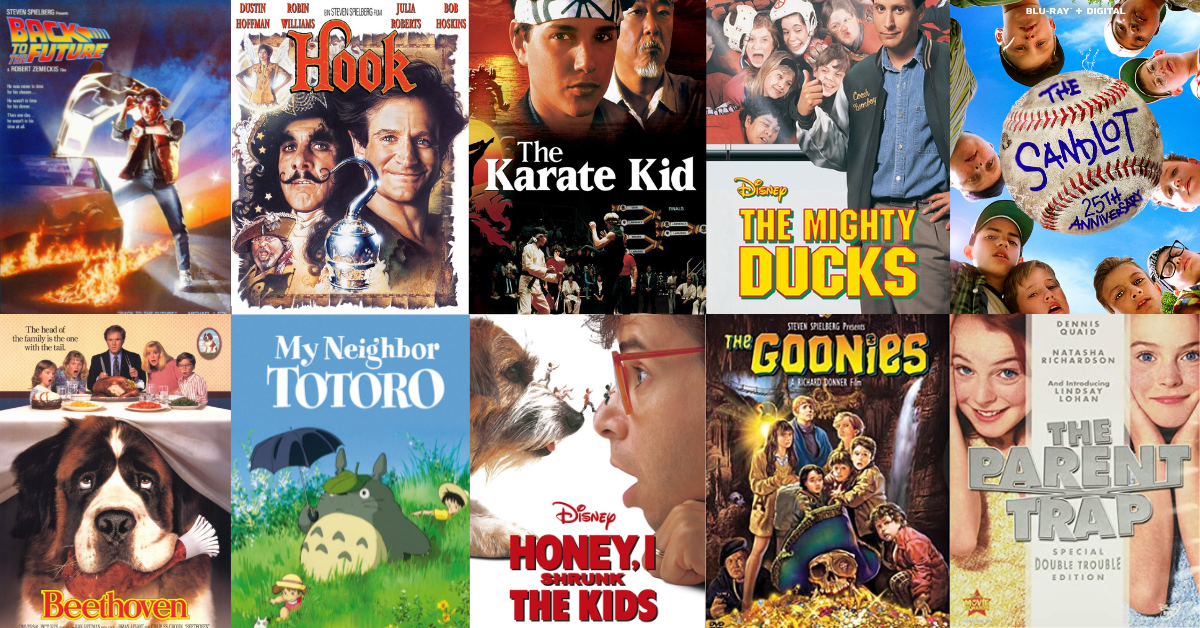 Watching movies with my kids is one of my all-time favorite activities. Two summers ago we dedicated ourselves to watching all of the Marvel movies in order. It was…a huge undertaking. Recently, I’ve noticed something pretty blatant in Hollywood – they love remaking the classics. (I mean, later this year there is A League Of Their Own, the TV series!) It got me thinking, what are some movies from the 1980s and 1990s that are required watching* for your kids at home? Here are 24 movies that I have shown my kids, whether for life lessons, the importance of dreaming big, or just because they’re one of my favorites.

Let’s Go On An Adventure 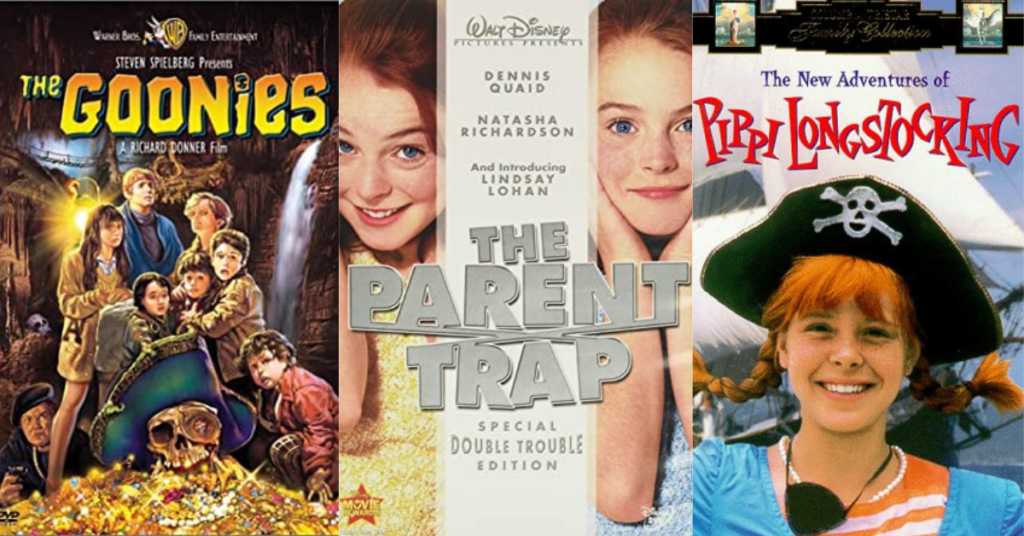 Some of the best movies are about kids going out on unbelievable adventures. There’s no better place to start then The Goonies (1985), following a group of kids who discover an old treasure map and try to save their homes from foreclosure. In 2017, the film was selected for preservation in the United States National Film Registry by the Library of Congress as being “culturally, historically, or aesthetically significant.” I couldn’t agree more.

Some other great adventure movies include The Parent Trap (1998), a movie about identical twins reuniting at summer camp after being separated at birth. (Yes, we know the original was in 1961, but the 90s remake with Lindsay Lohan was great.) And if you’ve got a rambunctious young girl on your hands at home, I have to recommend the classic musical about orphan Annie (1982), the classic musical about another redhead The New Adventures of Pippi Longstocking (1988), and the classic comedy about a child prodigy with psychokinetic abilities Matilda (1996). And if you were jonesing for a musical version of Matilda, don’t worry, Netflix has you covered later this holiday season.

Though I’m not the biggest sports fan, kid’s movies about sports seem to have made a huge impact in the 80s and 90s. Plus, you don’t need to know anything about sports to enjoy the coming-of-age darling that is the baseball movie, The Sandlot (1993). Actually there seems to be a movie for any and every sport you could think of. We’ve got The Karate Kid (1984) whose title seems self-explanatory and gave us the timeless advice to “wax on, wax off.” We’ve got pee-wee football in the Little Giants (1994) and hockey in The Mighty Ducks (1992). And finally, a lot more baseball with A League of Their Own (1992) and Field of Dreams (1989).

Is It All Fantasy? 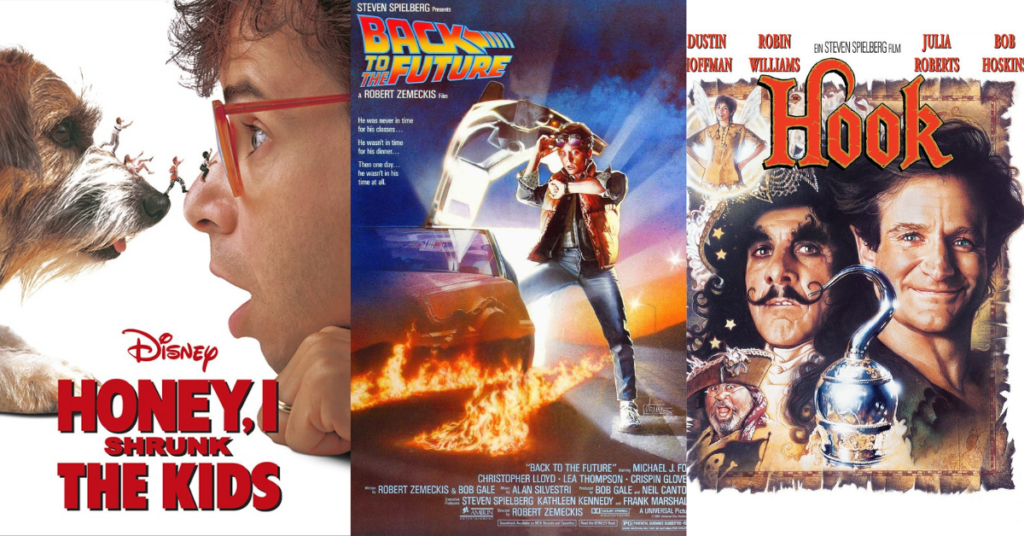 This time period of cinema is known for a lot of things but one thing that always sticks out is special effects. Best known for this would have to be George Lucas and his Industrial Light & Magic production company that sprung up during the creation of the Star Wars franchise. Movies focused on science fiction and fantasy storylines seemed to explode after the first movie in 1977. This includes the supernatural comedy following a group of parapsychologists in Ghostbusters (1984) and the introduction of Marty McFly and his time-traveling DeLorean in Back to the Future (1985). Some movies followed kids discovering fantasy worlds like The NeverEnding Story (1984) or paranormal creatures like E.T. (1982).

Other movies show children the power of magic like adult Peter Pan remembering his past in Hook (1991) or a grandfather telling his sick grandson the story of Westley and Princess Buttercup in The Princess Bride (1987). Some movies don’t even try to explain the magic they hold like the invention gone wrong in Honey, I Shrunk the Kids (1989) and a kid wishing for adulthood overnight in Tom Hanks-led Big (1988). 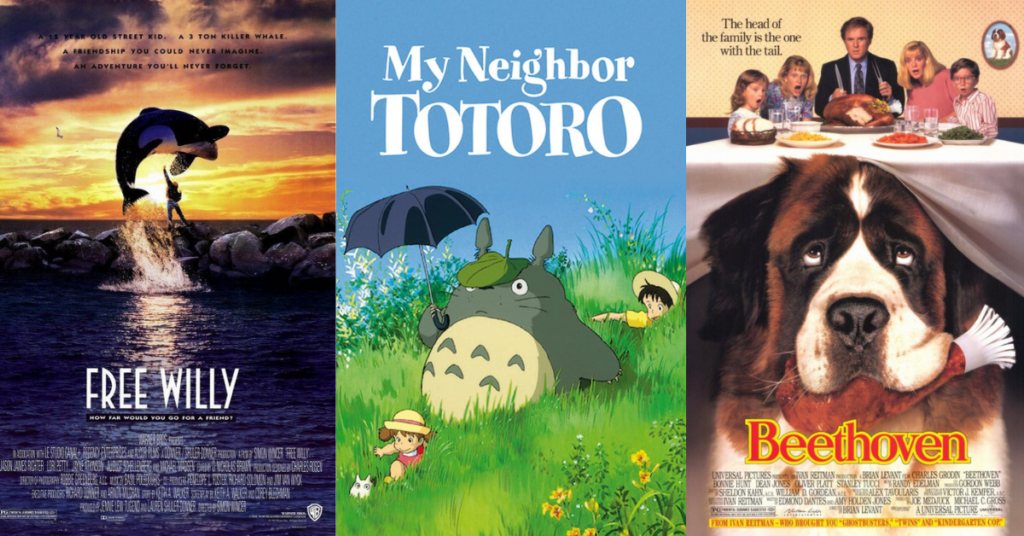 There are a few more movies that I feel deserve some love. When it comes to animal-focused kids movies, we cannot skip over the 1992 classic Beethoven. (I have to believe that there was an increase in St. Bernards as family dogs after that one.) And making mini conservationists out of all of us is the beautiful orca story in Free Willy (1993). Lastly, we have to give some love to animated movies. The Land Before Time (1988) follows a bunch of dinosaurs from prehistoric times, while My Neighbor Totoro (1988) follows two young girls interacting with friendly wood spirits in postwar rural Japan. Totoro is just one of a slew of incredible animated movies to come out of Studio Ghibli.

From live-action adventure to peaceful animation, I hope you’ve seen at least one of these 24 movies that defined youth-focused cinema in the 1980s and 1990s. Any movies we missed?

*The PG rating back in the 80s and 90s was a little looser. If you’re not sure the movie is right for your kids, research it first!