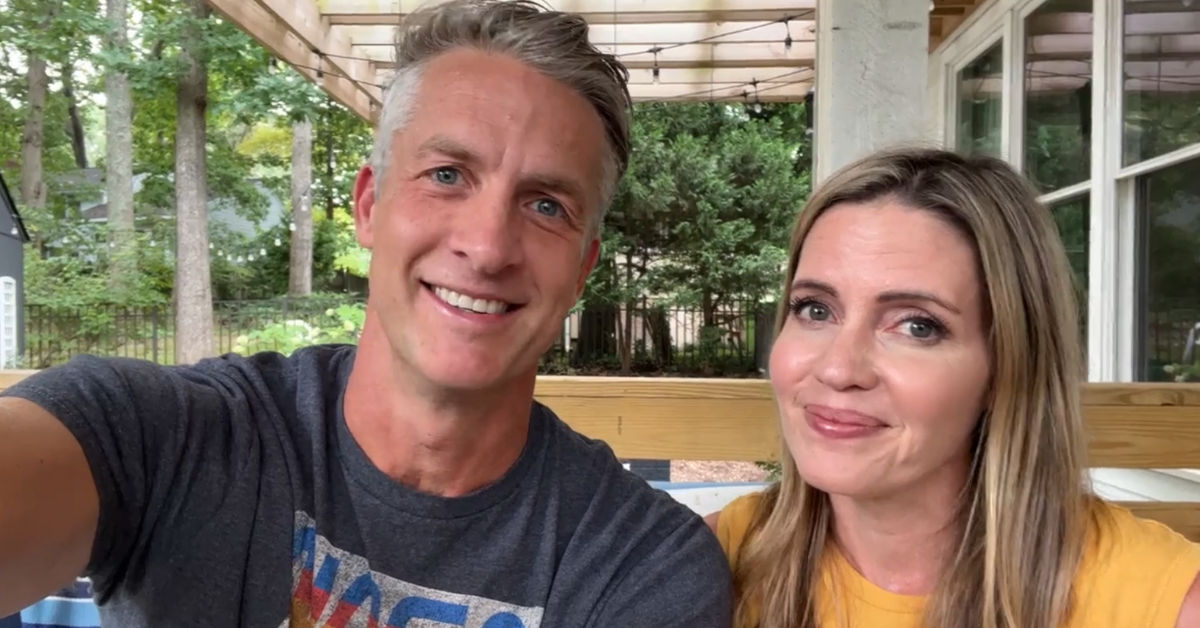 Last weekend Penn and I had a much needed date night.

We had done the thing we said we would never do – we had become those people who prioritize work and kids above our relationship. We had not been on a date, just the two of us, in months. We needed time when we didn’t talk about work projects, or the long list of things to do at home. We just needed to be us. It was lovely.

I went to the restroom as we were winding down the meal and noticed l had a big chunk of black bean in my teeth. I did a sassy speed walk to the table and did one of those under my breath screams, “Penn! Why didn’t you tell me I had this entire bean in my face?”

He shrugged, “You have pretty eyes and you are wearing a low-cut dress. I didn’t even notice.”

I believe him. He can just decide what to focus on. In this case, it was my boobs, but still.

The same goes for his moods. I joke that he’s like a human golden retriever but in reality, he’s not always in a great mood. People are shocked when I tell them *I’m* the optimist in the relationship. While I love daydreaming about really lofty goals, he’ll say, “Meh. That’s not realistic.” I’m telling you, he’s a happy guy but the man sees the glass as half empty, for sure.

So how does my sometimes-pessimistic husband always seem so dang happy? He just DECIDES to be happy. “There are a lot of things you can focus on. I try to pick the positive,” he told me. In the bean vs boobs incident, I wish he could have noticed, just for one second, the black chuck of food in my teeth – but that’s not the way he’s wired.

His mother has been advancing through the stages of Alzheimer’s for years. On the day we moved her into a skilled nursing facility, I was a mess. When it was eventually time to leave that  evening, I was ready to catch him from an emotional collapse. He drove out of the parking lot and said, “That sucked. But aren’t we lucky to have her in a place that will make sure she’s safe?” He chose to focus on the bright spot on an otherwise awful day. He moves through life like this. On a hard day, he will just make up his mind to be in a good mood.

Today Will Be A Great Day

I know, I know, I know – For some out there (including me some days) it’s offensive to just suggest a dramatic mood change can be made by just “DECIDING” on it. But dang, it looks like so much more fun to be happy like that.

So this week, I did the thing. Every day this week, before my feet hit the floor, I said to myself, “Okay. I’m in a great mood. Today will be a great day.” I would repeat it while I washed my face and brushed my teeth. I would say it out loud to the dog while my coffee was brewing.

You guys. It worked. I’ve had a great week. I tend to want to avoid discomfort as a general rule, so it was a balance of “sitting in the suck” during situations that required some real work. But dang, I just felt a bit lighter.

One of my kids had a hard moment. I’ll be honest, it was the sort of thing that would typically derail my day. I did all the “momming” I could in the moment then I actively tried to retrain my brain. I thought, “What are the good things that can come of this? Could they learn some valuable life lessons because of this experience?” I took some deep breaths and tried to focus on the positive. I cringe even typing that, but it helped.

I’ve always been suspicious of toxic positivity. Like most people I watched The Secret in 2008-ish. While I love a vision board, a five year plan, I watched it as a family member was dying of cancer. The suggestion that she just “focus on the positive” or that her cancer was a result of negative thoughts was incredibly offensive.

But perhaps there’s a balance for the rest of us, the vision-board-loving realists who need a bit of “happy” in our lives.

It’s like a muscle in my brain that has completely atrophied. I have to remind myself, daily, that today is going to be great.

What do you think? Can you just DECIDE to be in a good mood?