How To Be An LGBTQ+ Ally Past Pride Month 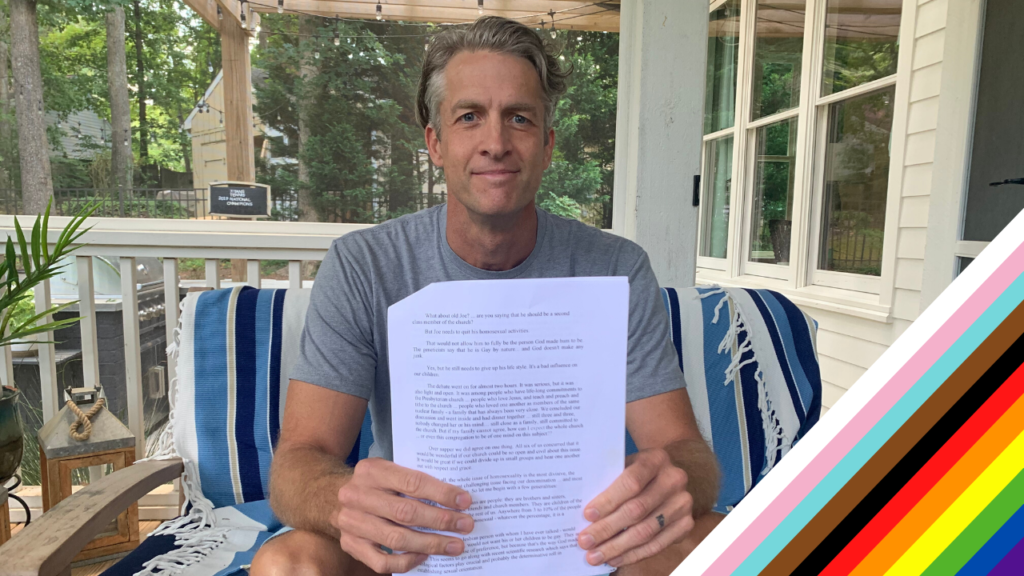 This is a late addition to Pride Month.  I apologize that it took cleaning out my Dad’s old condo to make this happen. We were moving him into a skilled nursing facility and clearing out a massive filing cabinet with all of the sermons he ever wrote over a 40-year career. I found the one that will always be my favorite. In this particular sermon, he was going to ask his congregation to extend their arms and welcome the LGBTQ+ community.

I remember this sermon well. I was sitting on the second row left.  I was nervous when he started reading it because the night before he had explained to the family, “Guys, some people may get angry with what I am going to say tomorrow.”

Why? For starters we were in North Carolina, and it was 1995.  It doesn’t sound that long ago, but the world was a lot different then.  It was only two years after our military adopted a “Dont Ask, Don’t Tell” policy (if you are gonna be gay, keep it to yourself). This was three  years before we had our first openly gay congressman, and 20 YEARS before the Supreme Court legalized gay marriage.  And Dad was delivering this message IN A CHURCH.

A lot has changed since 1995, and our language has become more inclusive, but with all that context, here are some excerpts of the sermon he preached on that day.

“First of all, gays and lesbians are people.  They are brothers and sisters, friends and church members.  They are children of the same creator God as all the rest of us.  Anywhere from 3 to 10% of Americans are gay.  Whatever the percentage, it is a significant number.”

“Second, they are not gay or lesbian because of preference, but because of the way that God made them.”

“Third, no matter how “hot” an issue this is for us, it is a very minor biblical issue.  There are only about a half dozen references to this in all of the Bible, compared to hundreds of texts which speak clearly to issues of social justice, oppression, love of neighbor, being judgmental and practicing generosity.  If you look at the Bible as a whole, only scant attention is paid to the painful and vexing subject.”

“Fourth, the Bible has a great deal to say about the treatment of minorities.  God seems to always be on the side of the outcasts, of those who are different. In both testaments, we are called to be a holy people, and the word “holy” means, in both Hebrew and Greek, different, unique.  God is on the side of the different.”

“Fifth and final: none of us has God’s final word on this matter.  We no more have God’s final word concerning our gay and lesbian brothers and sisters than the Southern Presbyterian Church of the 19th century had God’s final answer about slavery, which is certainly condoned in scripture… no more than the church of our parents’ generation had the final word about women’s rights, which were practically ZERO in the Bible.”

What I Thought I Knew

That last bit hit me like a sledgehammer.  It was the first time I truly understood that, as much as I thought I knew, I don’t know %&$#.  There was a kid, probably a good, well behaved kid,  sitting in a church just like this one 150 years ago who thought that owning slaves was just fine.  One hundred fifty years from now, some kid will think the same thing about me and my generation, and how ignorant we were.  I still wonder what other sins we will discover between now and then (we’ve discovered quite a few this year).

My dad spends some time talking about his interaction with LGBTQ+  people of all ages, and families of LGBTQ+ (because back then when you were gay you didn’t go to your parents or your employers, or even your friends, you went to your pastor).  The one common thread: he said everyone he talked to was “afraid.” Then he wrote:

“I cannot imagine being gay, but if I could, I would imagine myself being afraid most of the time….afraid that God had cursed me because society tells me this is a curse….afraid that if my congregation knew it, I would be asked to leave…fear would be my dominant feeling… and that, to me, would be a horrible way to live.  The promise of Ezekiel would be like the promise of the land of milk and honey: ‘I will make with them a covenant of peace.  They shall live in safety, and no one shall make them afraid.”

Dad was right.  A handful of people actually walked out of the sanctuary in the middle of that sermon and never came back to the church.  But hundreds stayed and were deeply moved and inspired.  It marked the beginning of a new congregation that day.  Our church became more diverse over the years, and, as Dad once proudly said, “donations went up! I didn’t see that coming!”

Dad is now in a skilled nursing unit about five miles away from me, doing the best he can to live with dementia.  I showed him this sermon in a recent FaceTime call and he was confused because he didn’t remember writing it.

Twenty five years ago, however, he was one of the bravest, most eloquent pastors in the South, and a great ally.

It is important to continually talk about being a strong LGBTQ+ ally, not just in the month of June but all year long. Kim and I feel very strongly about supporting and loving the LGBTQ+ community. Love is love is love. Period.

With everything going on in the world, I thought we would talk about how being an ally is work that never stops. My dad showed me that sometimes it’s big, bold declarations and sometimes it’s creating a space for others to take the microphone.

We are still learning, every day, about this. We asked one of our Holderness Family team members, Sam Allen, about  the best way to be an ally to the LGBTQ community.  Here’s what she wrote:

First, let’s start with what an ally is. From GLSEN: “Ally is a verb. Allyship is not performative, it’s action-oriented. Being an ally means taking action in solidarity with the LGBTQ+ community and responding to their self-determined requests.  For example, using the correct pronouns.”

When you can, do more. Wearing rainbow gear is not enough. Tweeting your support is not enough. Showing up for Pride parades is not enough. (But if you do go, remember it is not about you.) Hint: the best allies rarely take the spotlight.

Thanks Sam, and thanks Dad!  We love having people in our family  who know more than us.  Hopefully you learned something as well –  both from 1995, and from today.