Changing The Stigma of ADHD 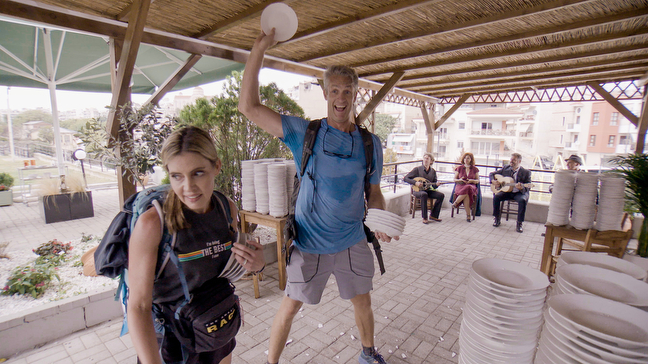 For Kim and I, it can be a bit unnerving giving video content over to someone else to edit.

It’s led to some nervousness for both of us this year, as we have been contestants on The Amazing Race, a CBS travel adventure show where partners race around the world for a million dollars. Since it’s CBS’s show, they can do whatever they want with the material that they get when the cameras are rolling. We don’t get to sign off on it like in our own content.

I have been pleasantly surprised, however, with the amount of time they have given to our specific mental health issues.

When Kim took an INSANELY BRAVE leap off a dam in Switzerland, they openly showed her struggles with anxiety and helped the viewer better understand the condition. For me, a recurring storyline has been my ADHD, both the good and the bad. I have had plenty of hyperactive reactions, and I even spazzed out and stared at a clue for 20 minutes without realizing that it was a clue. (The picture below says it all.)

In the post-race interviews I talked about “hyperfocus” – an ADHD trait which can be a real pain in many situations, like when you are fixated on TV or video games. However, in situations where hyperfocus is turned to something constructive, it can be a real superpower.

I first noticed it years ago when I was editing or writing music in my attic office. There were times I would be so deep into a segment of a video or the chorus of a song, I would look down at my fingers and see a burrito on a plate and I’d have no idea where it came from. Kim had come up and dropped it right in front of my face and I had no idea. (Pro tip: If you have ADHD like me, try to find a partner who not only puts up with it, but also nurtures it.)

But, on The Amazing Race my hyperfocus seems to be more obvious than ever before. Away from the dozens of daily distractions, we had one job: perform optimally when Phil said “GO!”  In this vacuum, I feel like ADHD became a real advantage…as long as I wasn’t losing everything I owned along the way (again, THANK YOU, KIM!)

In the episode you saw last week, Kim and I were fortunate enough to win a leg of The Amazing Race (and some money) thanks in part to my ability to hyperfocus. There was an important challenge at the end of the leg which required every team to listen to a priest give a 15 minute lecture about 10 saints. We then had to answer 5 questions by selecting 5 pictures (chosen from a group of 20 very similar looking pictures). The challenge tested our memory, both auditory and visual, and it tested our ability to remain focused for 15 minutes of information.

My dad is a preacher and I have heard about a thousand 15 minute sermons. I have never made it through a single one without spacing out, thinking about something else, then coming back to earth and wondering what the heck he is talking about – and my Dad was a much more engaging orator than this guy. BUT this week, I managed to pass the test on the first read-through, something that no other team was able to do. I didn’t space out, in fact it was quite the opposite: I hyperfocused. I remembered everything.

The leg victory seems to have struck a nerve as we have gotten quite a bit of positive correspondence from people who have the same type of brain I have. People are thanking me for accentuating the positive side of their condition, and asking me how I managed to harness the “superpower” that so many of them have. I can’t tell you how much it meant to me, every single letter. Here are three things I want everyone who wrote to know:

ADHD takes work. It’s work that others don’t have to do because it comes to them naturally.  That may bum you out a bit, extra work is no fun. But, ADHD is also a superpower – you just have to figure out how to harness it like every other superhero you know.

Spiderman was really terrible at using his web shooters at first.